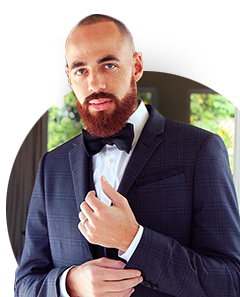 Noah Rakoski’s love affair with music began as a 3-year-old clanging pots and pans. By about age 13, he knew he wanted to be a record producer. And after stints as a SUNY Oneonta Funk Band saxophonist, talent manager, marketer and entrepreneur, that’s exactly what he became.

As label relations manager for YouTube Music at Google, Rakoski handles the relationship between a number of record labels and YouTube/YouTube Music and Google. He works with Atlantic Records, Epic Records, Hollywood Records (Disney Music Group) and others, along with their artists, including Cardi B, Roddy Ricch, Jack Harlow, Why Don’t We, Lizzo, Future, Dj Khaled, Rick Ross, Meghan Trainor, Tini, Sofia Carson, Frozen 2, Black Eyed Peas, Jennifer Lopez and many more.

I chose the college based on its reputation, and the music industry program...

"Oneonta had the faculty, it had the facilities, it had the degree I wanted, and it was affordable," Rakoski says. "I chose the college based on its reputation, and the music industry program because I wanted to be a record executive. I wanted to help find and cultivate talent, to be the one to surface what was new and hot and bring it to others."

Making music was part of daily life as an Oneonta student. "I had a studio in my dorm room. My parents, one Christmas they bought me a mixer and then after that I saved my money working at side jobs, McDonalds and weed whacking, and I bought microphones and a beat maker, music programs. When I wasn’t in the tunable studio making music with other producers and artists and musicians -- I was doing it in my dorm room.

"I played in a number of ensembles, my favorite being Jeremy Wall’s Funk Band. I was the lead artist, if you will. I sang, I rapped and I played sax. He would often do songs that had hip-hop or R&B or funk vibes to them. We did a lot of Prince, James Brown, and then he would let me freestyle. It became a thing, People loved it and we had big crowds."

One of the most memorable parts of my program was Dr. Janet Nepkie...

Rakoski said every class he took as a music industry major gave him skills he has used in the real world. “The second I left college I was using marketing communications, I was using contract negotiations, legal issues, I was using music theory--because I had to talk to songwriters and producers, and if you didn’t know what they were talking about, you were out of the studio.”

Rakoski still fondly recalls the close bonds he formed with the Oneonta music faculty. "One of the most memorable parts of my program was Dr. Janet Nepkie: the classes she taught, the internship program she managed and the fact that she truly cares about her students. She checked on me during an internship where they were making me get coffee and do really pointless things. She wasn’t having it. She said, 'Look, I’ll pull him off this internship. He’s here to learn.'

Dr. Nepkie was one of the smartest teachers I’ve ever encountered and also one of the kindest. She came across as very tough, but she was tough in a way that just pushed you to be better.”

Rakoski’s career started with a Jive Records internship that turned into a full-time job in artist management. He then began to develop pop and urban acts, discovering a passion for creating start-up companies focused on innovative technology and marketing.

In 2012, he and his business partner set out on a new venture that focused on talent management and monetization for online artists and content creators. Their growing firm quickly caught the attention of major networks, and they closed a merger and acquisition agreement with Maker Studios, where they became executives and shareholders. In 2014, Maker Studios’ was sold to The Walt Disney Company for $500 million.

Rakoski lives in LA with his wife, Aubrey, who also graduated from Oneonta in 2007 and has a successful career as associate director of advancement, alumni relations and planned gifts for Campbell Hall Episcopal, a prestigious K-12 private school.

"We met at Mills. She bought me an ice cream sandwich and the rest is kind of history. We’ve been together ever since."

More than a decade after graduating from SUNY Oneonta, Rakoski considers himself “happily successful. Success is an ever-evolving and somewhat unattainable goal. It’s more important to be happy. If you’re happy doing what you want to do, then you can say you’re successful.”

"Commit. Commit to doing music, whether that’s music industry, music composition, music performance, music in the marketplace, whatever it is that you want to do," Rakoski says. "You want to be a music lawyer, you want to be performer, you want to be a publishing executive. You have to commit to it. If you love this, and this is your passion and you really want to get a degree in music, commit to it and you’ll find the right place that fits what you’re actually looking to do.  For me, that was Oneonta."