Dr. Faux is a theoretical and mathematical physicist. His work focuses on quandaries in quantum field theory, supersymmetry, supergravity, and string theory. Along with collaborator physicists and mathematicians, he has promulgated the use of novel graph-theoretic techniques to investigate the off-shell representation theory of supersymmetry in diverse dimensions. He has published papers on supersymmetry, supergravity, orbifold compactifications of string and M-theory, dualities, topological features of supersymmetric quantum mechanics, brane world scenarios, matrix models, extended conformal supergravity, and other topics in fundamental physics.

In an earlier life, Dr. Faux earned a B.S. in Electrical Engineering from Penn State University in 1985, and spent a year and a half as a semiconductor development engineer at IBM in East Fishkill, NY, prior to returning to graduate school.

I obtained my Ph.D. in Space Physics from Boston College in 1997. Under the direction of Dr. Robert Carovillano and Dr. Edward Weber, I used radar and optical measurements to investigate the electric circuitry of the aurora borealis. I continued this research on global scales as a post-doc at the Johns Hopkins Applied Physics Lab from 1997 to 1999. After a brief stint as a Visiting Professor at Bloomsburg University of Pennsylvania, I arrived at SUNY Oneonta in August, 2000.

Although I continue to be interested in the physical processes occurring in the near-Earth space plasmas of the ionosphere and magnetosphere, I have also conducted research with students on electrostatic phenomena and standing waves in enclosed bodies of water known as seiche.

A recent project (below) with two students investigated the feasibility of detecting seiche in Long Island Sound and Great South Bay. 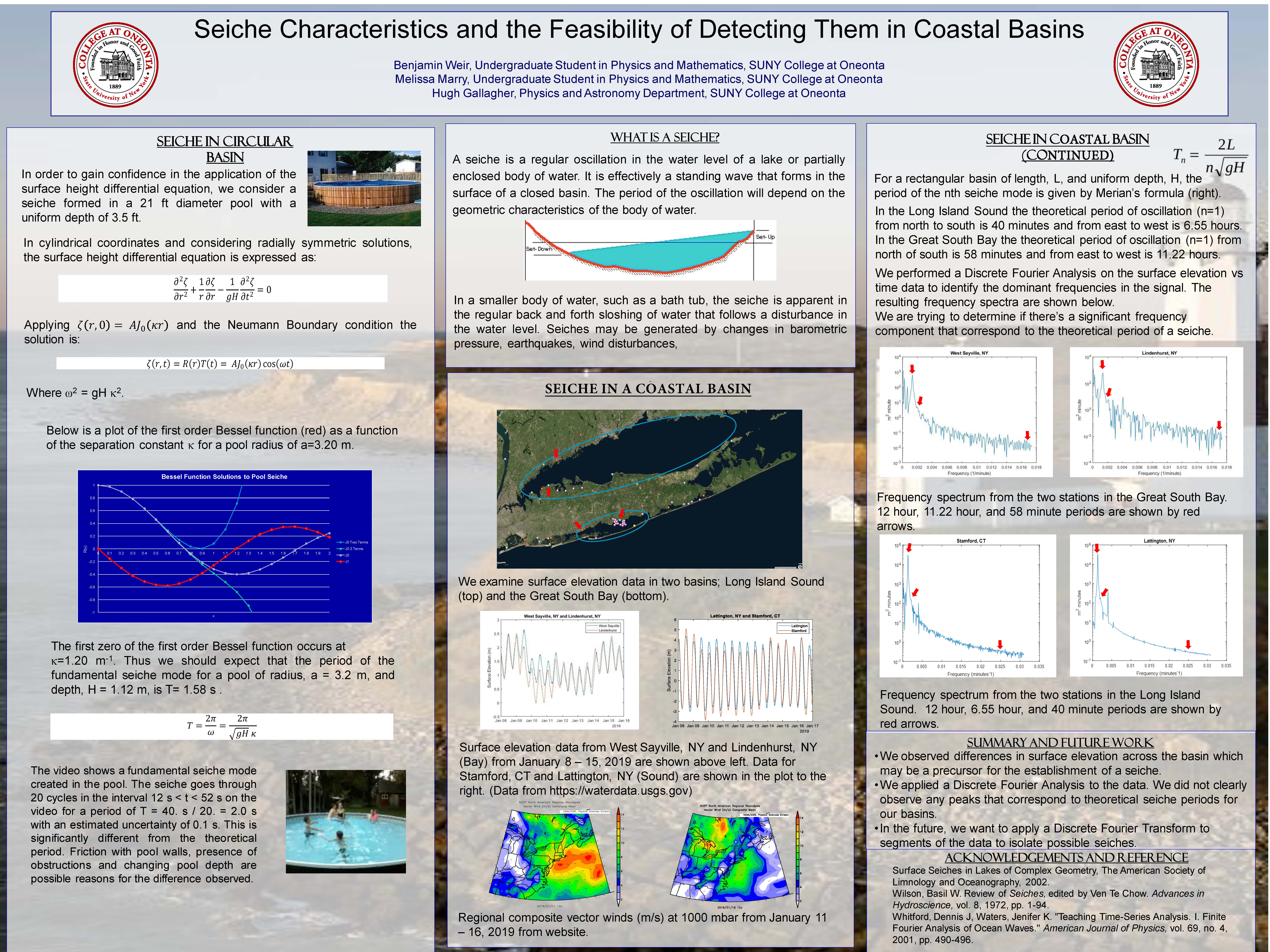 More recently, we measured and modeled the characteristics of a seiche in a backyard pool. The results were presented at American Association of Physics Teachers Summer 2020 Meeting.

Dr. Rapson is an Astronomer and public outreach enthusiast who enjoys teaching people of all ages about science. A native of Rochester, NY, she earned her Ph.D. in Astrophysical Sciences and Technology at RIT where her research focused on the chemical composition and structure of planet-forming disks around nearby young stars. Her research interests include star and planet formation, exoplanets, and projects that can be done with small telescopes. She also enjoys giving public talks, visiting K-12 schools to teach astronomy, and participates in WAMC's Vox Pop radio show with Astronomer Bob Berman.

Prior to joining the faculty at Oneonta, Dr. Rapson was the director of the Dudley Observatory in Albany, NY. There, she designed and taught astronomy education programs for children and adults, operated the Suites-Bueche planetarium, and oversaw the construction of roll-top roof observatory with a 14inch telescope. She is a National Astronomy Ambassador and was awarded the 2018 Emerging Leader Award by Girls Inc. of the Greater Capital Region for being a role model to young women who aspire to become scientists.