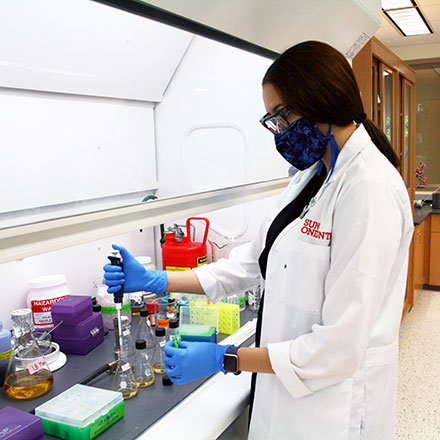 This year’s Student Research & Creative Activity (SRCA) Day at SUNY Oneonta, held April 15 and 16, takes the form of a virtual showcase. This is the second year the event has taken place virtually. Previously, it was held at Hunt Union. The event features live poster sessions, student presentations, and a keynote address by Jared Reynolds ’12, founding member of RM Law Group LLC in Chicago, titled “Going With the Flow: A Guide to Being Confident While Uncertain.”

The SRCA Showcase includes 60 projects representing the work of 90 students and 50 faculty mentors from 30 academic departments. In addition, three “live” student presentation sessions are scheduled where you can interact with the student presenters of these diverse research and creative activity projects.

Among the students taking part is biology major Claire Curtin ’21. Curtin, who has been intrigued by parasites since watching “Monsters Inside Me” as a child, has been working since Spring 2019 with Florian Reyda, professor of biology, on a study of parasites in North America freshwater fishes. After focusing on nematodes and a parasite found in redhorse fishes, she now is studying the worm Octospinifer macilentus, which was last described in 1919. Later this year, Curtin hopes to release a re-description of the species. For her third appearance at SRCA Day, she created a poster.

“Engaging in this research has allowed me to gain a lot more knowledge about how the scientific process works in field biology,” she said. “I’ve also learned that by studying parasites, we get a better idea of what’s happening in the ecosystem.”

Sabrina De La Rosa ’21, a media studies major with a concentration in production, created a short film on the aftermath of last summer’s Black Lives Matter protests that incorporates poetry, the spoken word, music, and dance. “My goal for the project was to make it as meaningful as possible by exploring different art forms as a way of movement, of progress, of pushing for advancement,” she said.

Leading up to her third SRCA Day, De La Rosa created a poster and a trailer for the film; during the event, she screened it and hosted a Q&A session. Next, she plans to make it available on platforms such as YouTube and Vimeo and submit it to the New York Latino Film Festival and other film festivals.

“Through this project and those that preceded it, I’ve gained insight into how to give people meaningful content that benefits underrepresented communities and portrays people of color in a more accurate light,” she said.

Curtin and De La Rosa’s projects are supported by the Student Grant Program for Research and Creative Activity, funded by the College at Oneonta Foundation and the Alumni Association. Their presentations and those of their colleagues can be viewed at suny.oneonta.edu/grants-development-office/ student-research-creative-activity-day.

Thirty-five percent of the SRCA projects have been supported by the College Foundation and Alumni Association through funding allocated to the Student Grant Program for Research and Creative Activity.