Due to the ongoing pandemic, it is currently the policy of the college to not allow the general public into campus buildings. With great regret, we are therefore unable to invite non-students, including the local community, into our theaters to enjoy our productions. Fortunately, some of our shows will be conducted in virtual formats that we may be able to share with you (see below for further details). We look forward to a time when we may welcome all of our audiences back into our venues. In the meantime, stay safe and be well.

The Radio Plays Project will bring to life seven short plays organized into three episodes. The plays will emphasize voice acting and traditional radio theatre techniques that are both a throwback to traditional radio dramas of the early twentieth century and a nod to current voice performances and storytelling in dramatic form found in radio, podcasts, videogames, spoken word poetry, and animated features.

The plays will be pre-recorded, edited, and released for listening on YouTube.

Tickets will not be required.

See below for links and release dates.

In celebration of Black History Month and Women's History Month, The Radio Plays Project will share two short plays focused on stories about women past and present.

Featuring three short contemporary plays by playwright Donald Loftus, these stories range from comic musings about literary history, to modern stories of compassion, self-advocacy, and loss during the Covid era.

As a finale to The Radio Plays Project, we will recreate two adventure episodes from the early days of radio, including the original adventures of Superman and Nick and Nora Charles.

In celebration of Black History Month and Women's History Month, The Radio Plays Project will share two short plays focused on stories about women past and present.

Due to publishing arrangements, Episode 1 is no longer available to the public.

Learn more about the playwrights, cast, and crew

In the Parlour
March 1st 1913, on the eve of what was to become the most historic Womens’ Suffrage march in history, the African American activist Mary Church Terrell negotiates with white suffragette, Alice Paul, who has organized the march, but is unwilling to allow African-American women to participate. -New Play Exchange

About What Matters
A short, pointed play about, among other things, priorities, boundaries, certainties and letting life get to you. Waiting together for an acknowledgement that may never come, two friends find themselves caught up in a dangerously circular game of logic and loyalties, as they realize they’ve probably missed lunch. -New Play Exchange 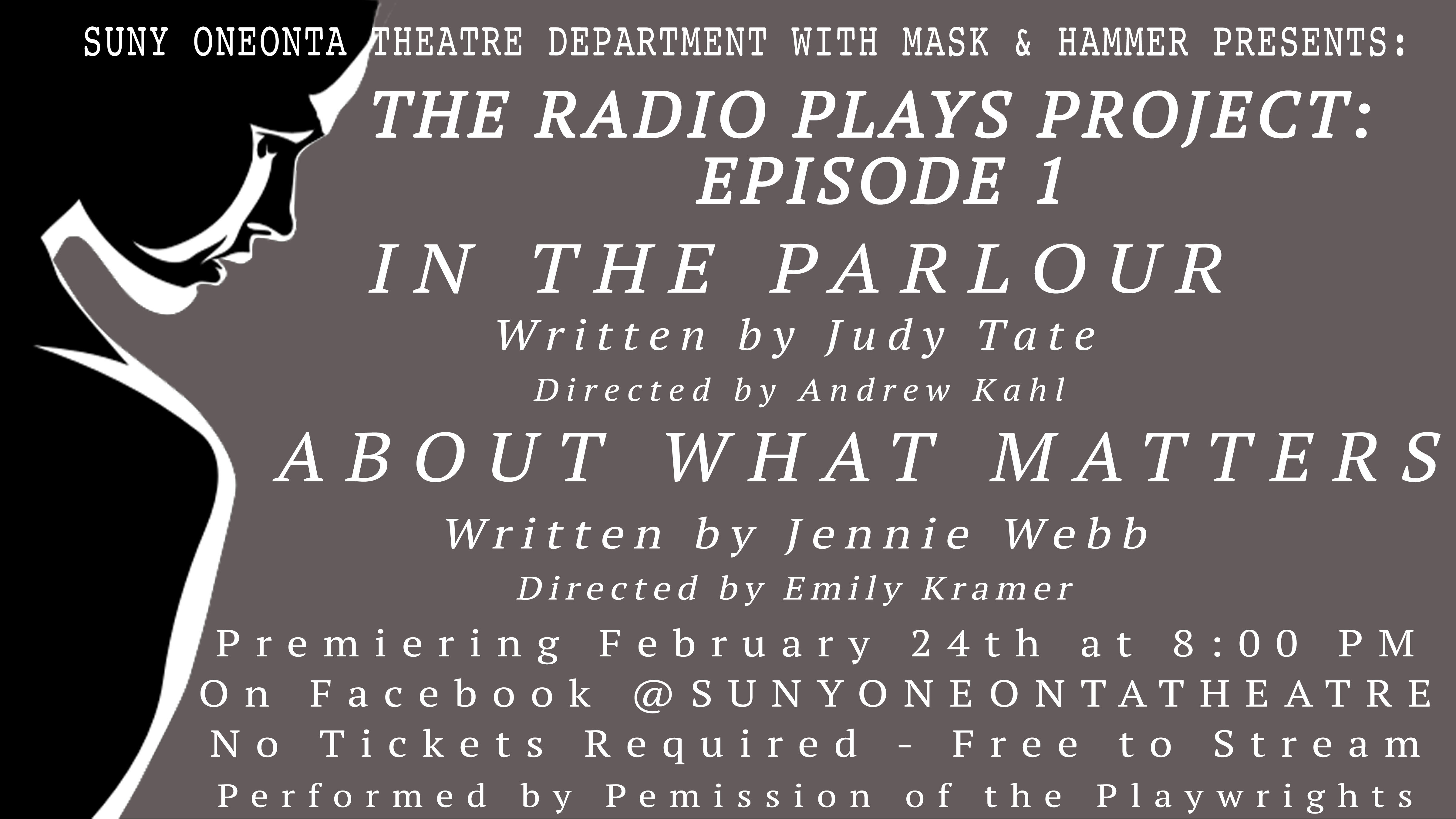 Featuring three short contemporary plays by playwright Donald Loftus, these stories range from comic musings about literary history, to modern stories of compassion, self-advocacy, and loss during the Covid era.

Due to publishing arrangements, Episode 2 is no longer available to the public.

Learn more about the playwright, cast, and crew

Amusing Willie
Willie, a British playwright quickly learns that everybody is a critic as he tries to convince his three female muses that his new play about “star-crossed” lovers is terrific! The muses remind him of past works where he ignored their advice, and of the unhappy outcomes each suffered as a result. -New Play Exchange

Tonight at the Stage Door
Charlie, the night watchman at a Broadway theatre, has fallen asleep in his chair at his post near the stage door. Suddenly, there is a pounding on the stage door. The unanticipated visitor is Jimmy, a chorus boy who recently lost his job. Jimmy was in the revival of “West Side Story”, which recently and abruptly closed at The Broadway Theatre due to the coronavirus pandemic. Jimmy explains that he has now been evicted from his apartment and is in a desperate situation. He turns to Charlie for help. We quickly learn that Charlie has his own problems. -New Play Exchange

Dress Blues
Late in the afternoon, on the last Friday of summer, Boston boutique owner, Christopher, is trying to finish a sale to wealthy and difficult, Mrs. Simmons. Christopher is a bit anxious as he also needs to “closeup shop” so that he and his partner, Nicholas can be on their way to The Cape for the final summer weekend of the year. -New Play Exchange 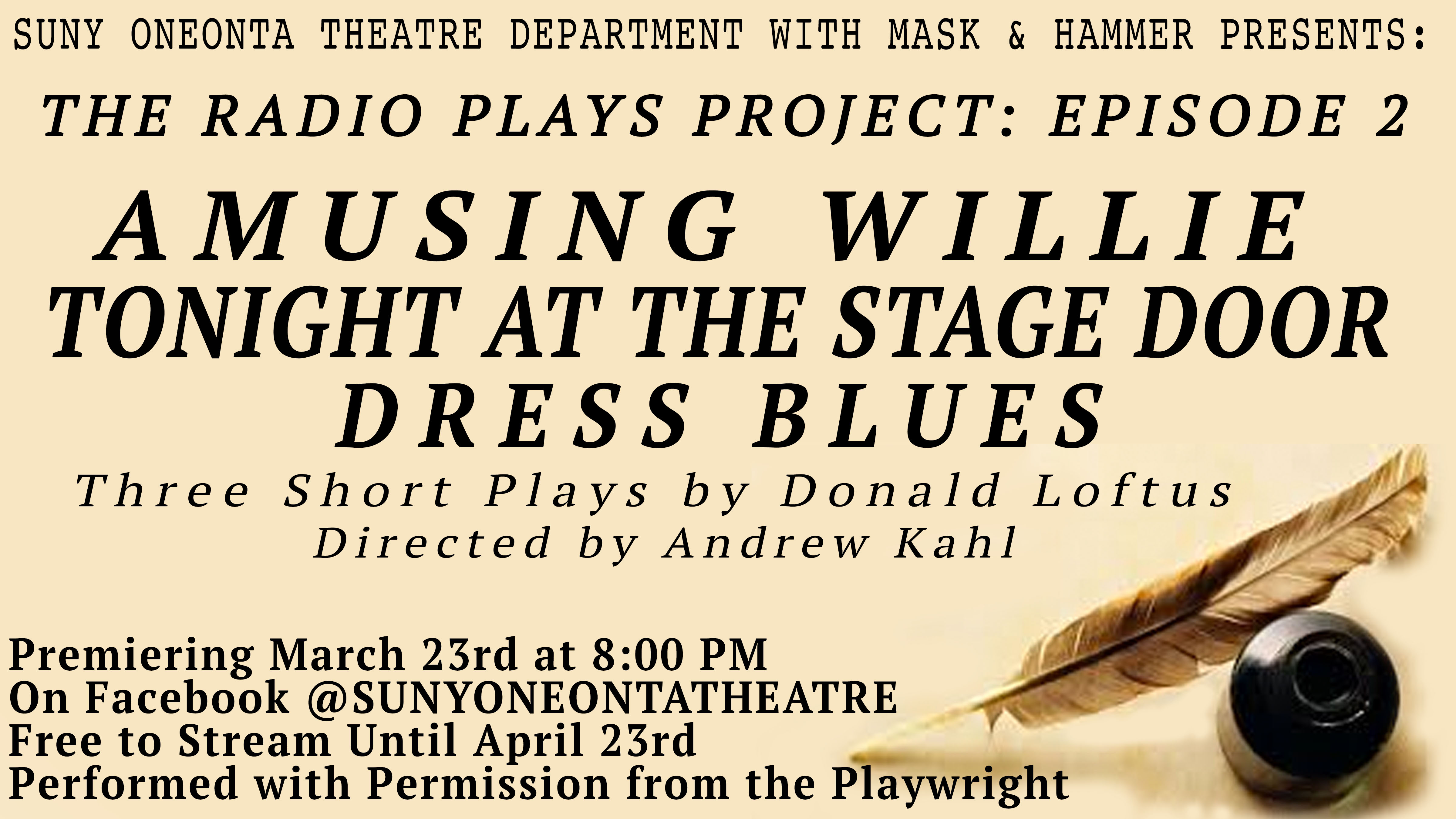 As a finale to The Radio Plays Project, we will recreate two adventure episodes from the early days of radio, including the original adventures of Superman and Nick and Nora Charles.

Meet the cast and crew

Superman: The Meteor of Kryptonite
The guardian of a meteorological sample of Kryptonite has died. The uncertain fate of the sample raises troubling questions about the future of Superman. Originally broadcast in September of 1945, this episode includes the famous team of Perry White and Lois Lane as friends and colleagues of mild-mannered reporter, Clark Kent, and his super-secret alter-ego Superman.

The Adventures of The Thin Man: Valentine's Day Episode
Written for the radio in 1942, Nick and Nora Charles celebrate Valentine's day and discover that Cupid's love darts sometimes lead to murder. Originally created by Dashiell Hammett in his 1934 novel The Thin Man, Nick, a retired detective, and Nora, his wealthy heiress spouse, were featured in films, radio plays, and television adventures for more than 30 years. 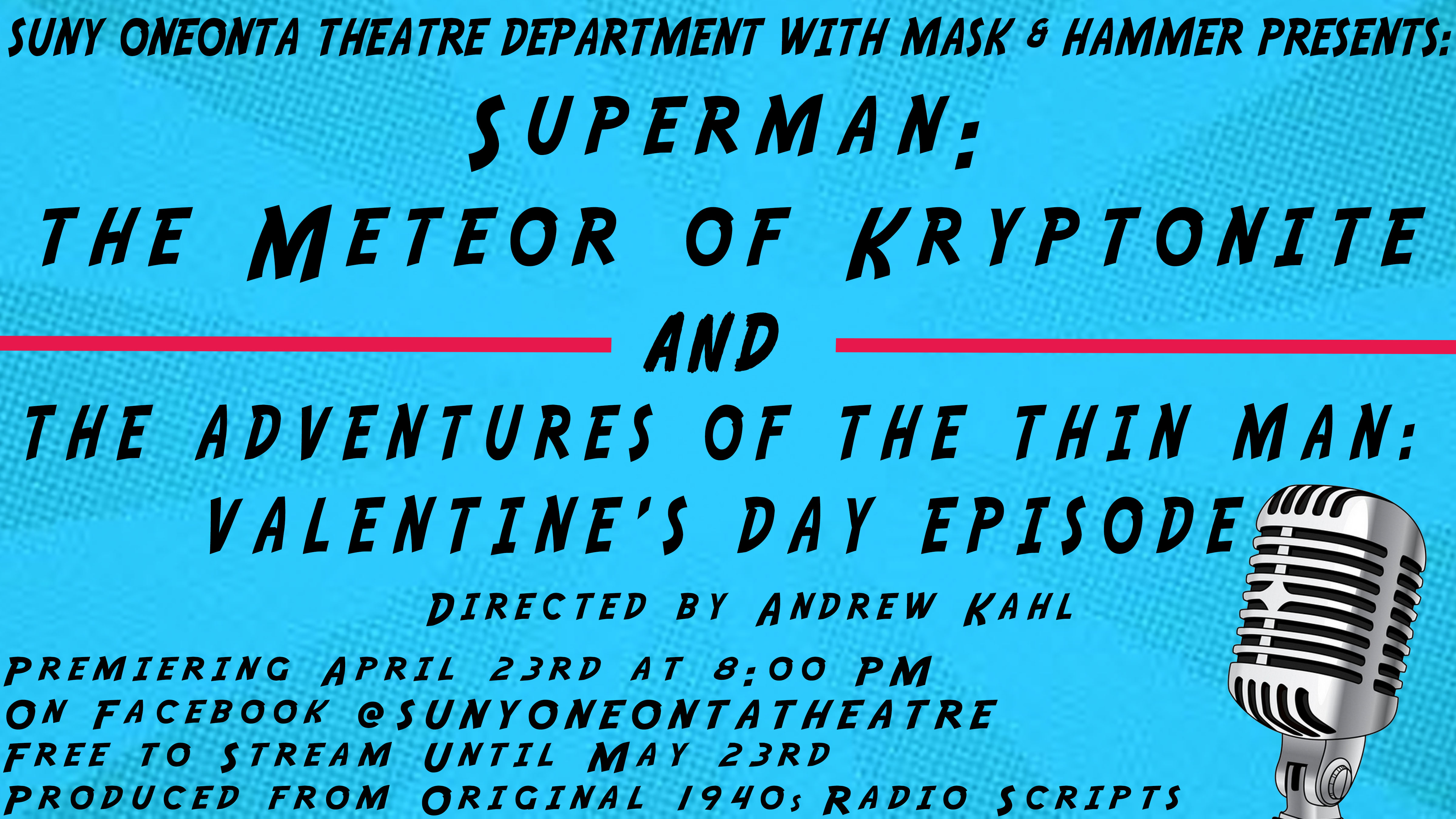 By Euripides
Translation by Diane Rayor
Directed by Kiara Pipino

This show will be performed over the internet using video conferencing. The performance will be recorded to video, edited, and released to the public on the premiere date. The premiere will be advertised in advance on this website and our Facebook page.

Watch the show:
The show premiered on November 20th, 2020:
Watch the Show Now on YouTube

Talkback:
A talkback with the director, cast, and production team of the Theatre Department’s showing of Medea; with special guests Diane Rayor and Margherita Rubino. Diane authored the translation of Euripedes’ text used in the production; she is a Professor in the Department of Classics at Grand Valley State University. Margherita is a Professor of Classics at Universita degli Studi di Genova in Italy, a theatre and opera critic for national newspapers Il Secolo XIX and La Repubblica, and a member of Instituto Nazionale del Dramma Antico (INDA) – a foundation responsible for the Classic Festival in Siracusa. Margherita is also the author of the publication “Medea Contemporanea,” which deals specifically with modern interpretations of Euripides’ text.
Watch the Talkback Now on YouTube

Euripides’ tragedy Medea, based on the Greek myth of Jason and Medea, is a remarkable study of injustice and ruthless revenge. A play about how society treats outsiders, it focuses on the fate of a strong and intelligent woman, Medea, who follows her new husband Jason to his home country. Betrayed by him and her new home, she is treated as an intruder and a danger to society. 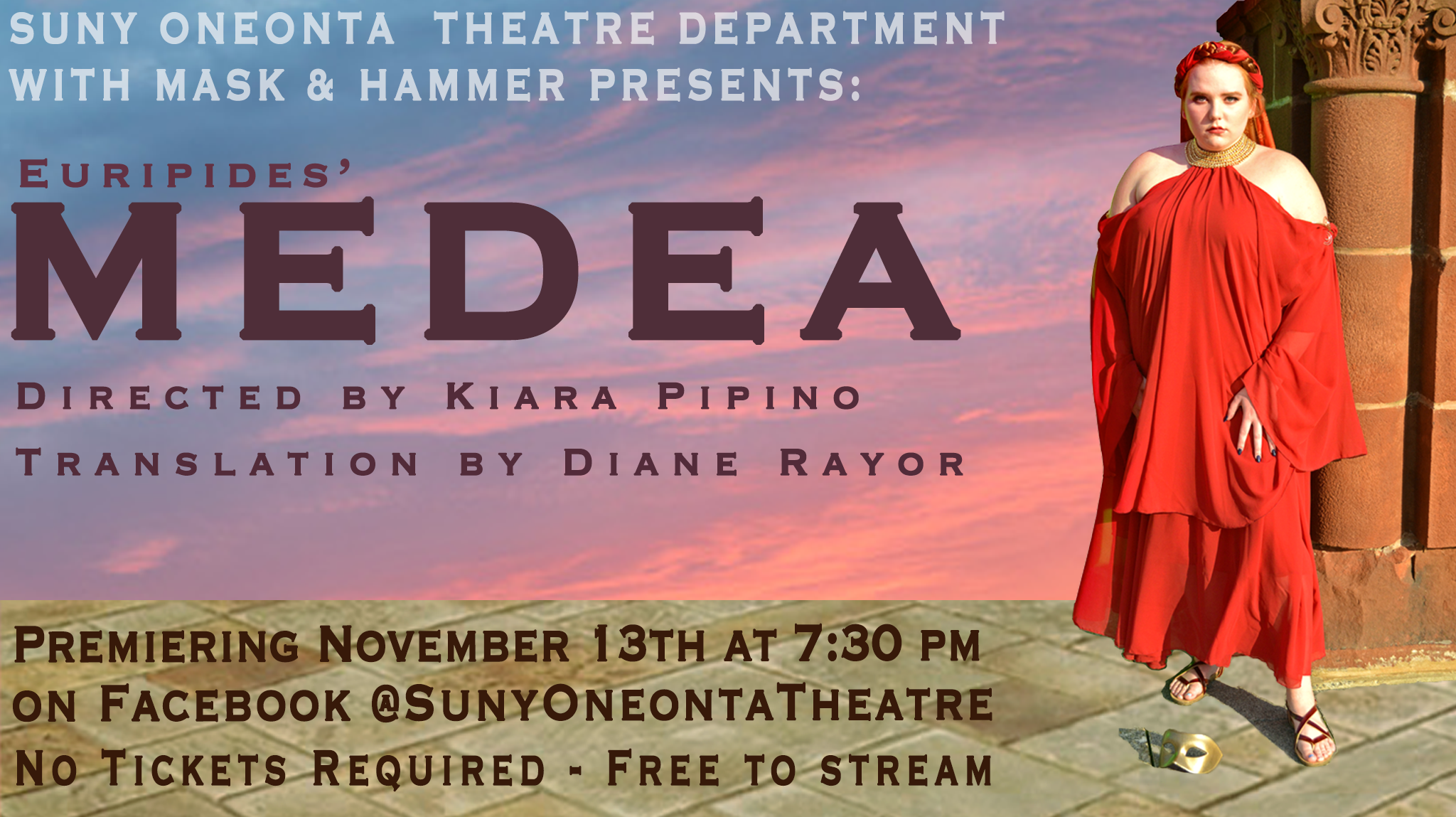 Watch the show:
Our live performances have concluded as of November 19th, 2020.
A recorded version of the show is now available on YouTube:
Watch the Recording Now on YouTube

When Elmer Elevator hears about the plight of an overworked and under-appreciated flying baby dragon, he packs his knapsack with supplies and stows away on a ship headed for Wild Island. Nothing will stop Elmer from rescuing the dragon!

My Father’s Dragon is the first in the classic fantasy trilogy of Elmer Elevator and the flying baby dragon.  A 1948 Newbery Honor Book and an ALA Notable Book, it has delighted children and their parents for generations. 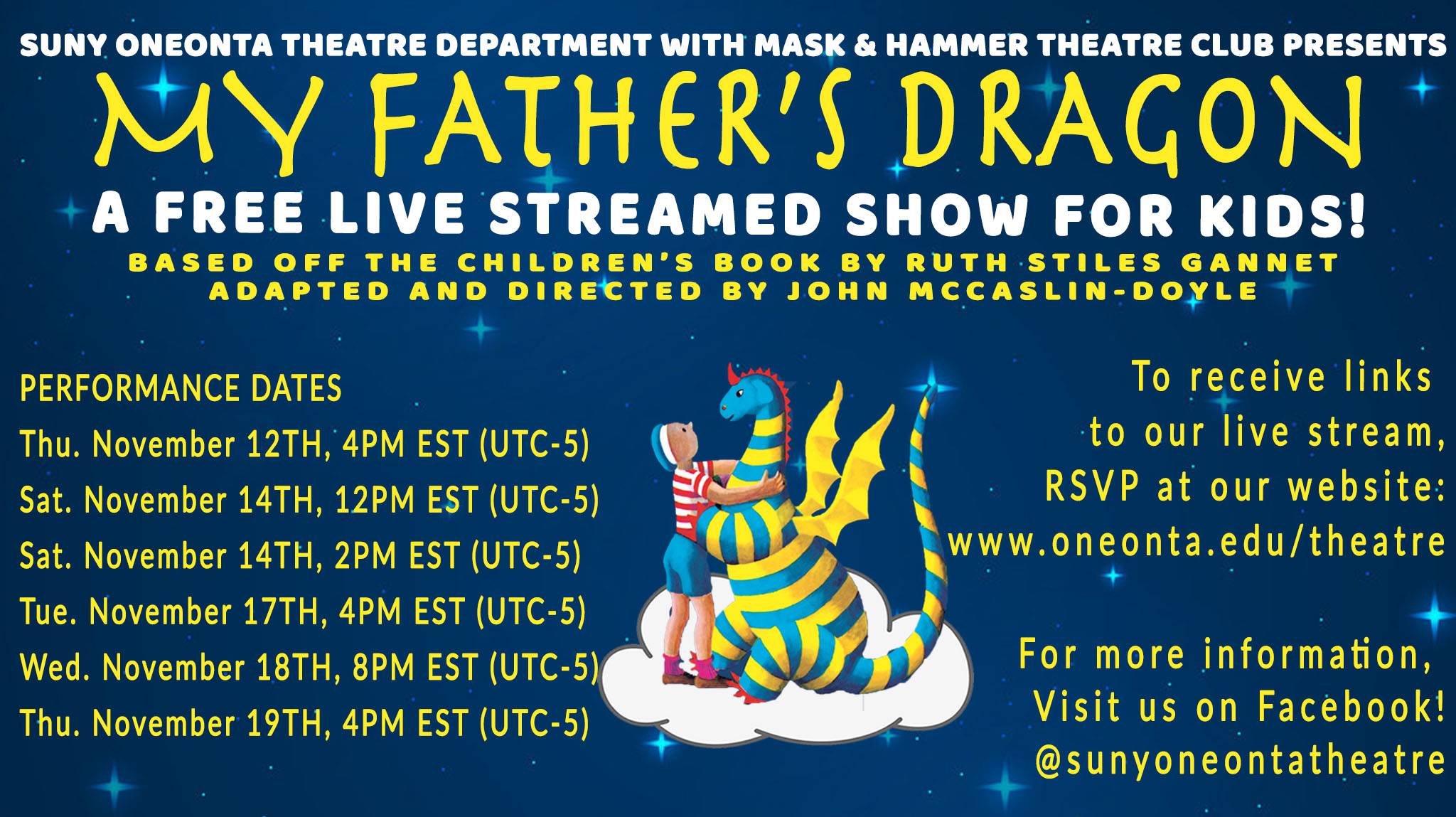 Productions by the Mask & Hammer theatre club are entirely student produced and directed.

Two adult siblings share one profound thing: a violent childhood trauma they both survived. Over the years they have gone on to very different lives. While the siblings sustain an undeniable and troubled connection through the years, that event from childhood continues to shape their lives in contrasting ways. After losing touch for a couple of years, the sister and brother find themselves on a road trip traveling back to the rural setting of their childhood. Before they reach their destination, a series of mishaps strands them in a small town in the Flint Hills of Kansas where they are unexpectedly caught up in the lives of three locals each of whom have developed their own ways of coping with a quickly changing world. 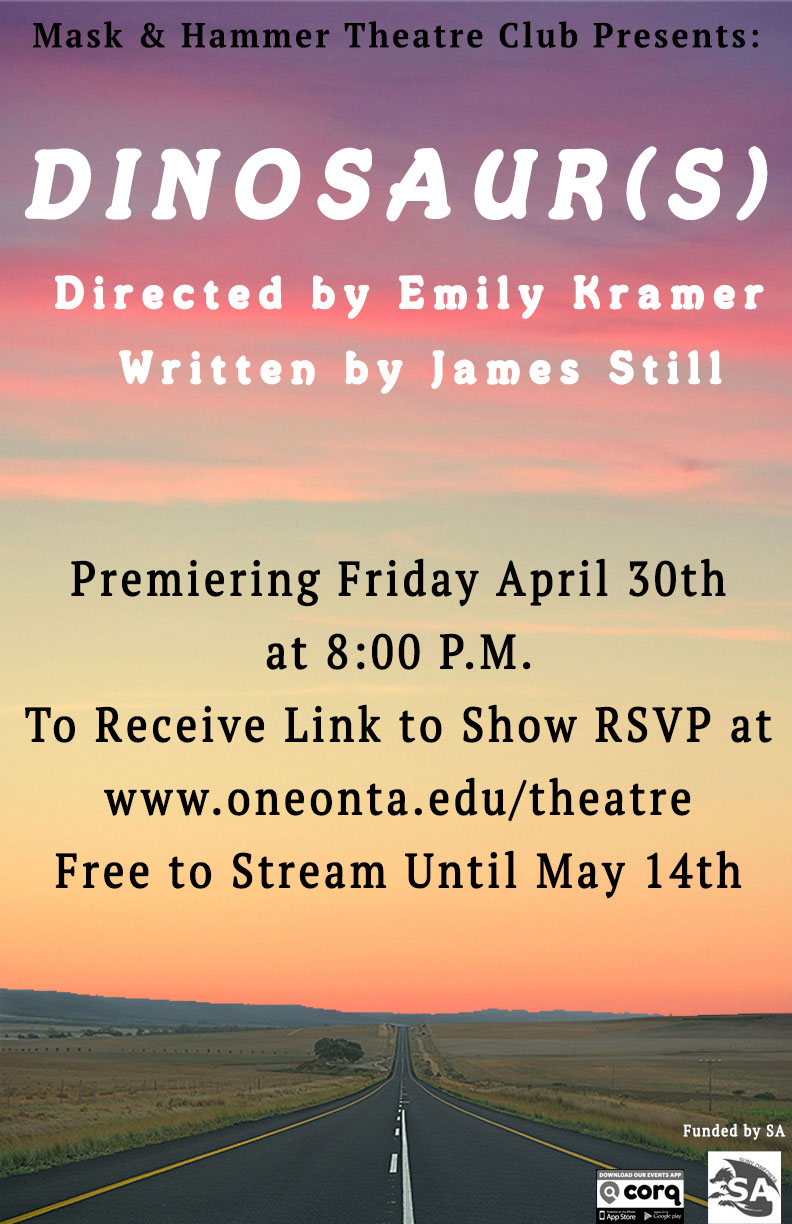 All SUNY Oneonta students are encouraged to audition for department productions.

For a listing of past productions see the department’s Production Archive.