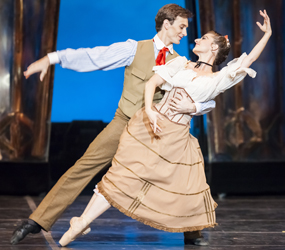 The art of the Vatican Museums, “MOULIN ROUGE – The Ballet” and Shakespeare’s “The Tempest” are among the offerings in a new series of cultural theatrical screenings at SUNY Oneonta this semester.

SUNY Oneonta has partnered with SpectiCast, a Philadelphia-based event cinema marketing and distribution company, to offer a series of HD cultural arts film programs at the Red Dragon Theater in the Hunt College Union. All programs are open to members of the community. Tickets ($5 with valid SUNY Oneonta ID and $8 for all others) can be purchased at the Hunt College Union with cash or Dragon Dollars and online at oneontatickets.com.

The following programs are scheduled:

“As the Palaces Burn” Music Documentary—Feb 3, from 7 to 10 p.m., and Feb. 7, from 2 to 5 p.m. “As the Palaces Burn” is a feature-length documentary that originally sought to follow the Grammy Award-nominated American heavy metal band Lamb of God and its fans throughout the world. However, during filming in 2012, the story abruptly took a dramatic turn, when lead singer Randy Blythe was arrested on charges of manslaughter in the death of a young fan in the Czech Republic. The film includes a new, pre-recorded Q&A with the band members.

“The Tempest” —Feb 24 from 7 to 10 p.m. and Feb. 28 from 2 to 5 p.m. Filmed live over three performances, this Shakespeare masterpiece is captured by 14 high definition cameras, giving the viewer an upfront and intimate theatrical experience.

World Circus Performing Arts—March 24 from 7 to 10 p.m. and March 28 from 2 to 5 p.m. More than 25 countries are represented at the Monte Carlo Circus Festival, and only after years of discipline are acts allowed entrance into this elite competition. “World Circus” is a documentary following five top circus acts for two months, through six countries and 11 cities. The film includes interviews with the founder of the Big Apple Circus, owner of Ringling Brothers and artistic director at Cirque du Soleil.

MOULIN ROUGE® - The Ballet—April 14 from 7 to 10 p.m. and April 18 from 2 to 5 p.m. Along with a rousing French-inspired soundtrack, the ballet features choreography by Jorden Morris and a passionate story of love, ambition and heartbreak. This vibrant cinematic presentation is directed by brothers Pierre and François Lamoureux of Cinemusica, the duo behind Grammy Award-winning concert film “Zappa Plays Zappa” and the Emmy Award-winning “Harry Connick Jr., In Concert - On Broadway.”

“Caesar and Cleopatra” —April 28 from 7 to 10 p.m. and May 2 from 2 to 5 p.m. “Caesar and Cleopatra” is a comedy about the relationship between a veteran Roman political strategist and an enchanting Egyptian teenage queen. The movie version of George Bernard Shaw's celebrated play stars legendary Canadian actor Christopher Plummer, and Nikki M. James, winner of the 2011 Tony Award for Best Featured Actress in a Musical for her role as Nabulungi in “The Book of Mormon.”

“La Traviata” —May 5, from 7 to 10 p.m. and May 9 from 2 to 5 p.m. “La Traviata” tells the story of the beautiful but fragile courtesan Violetta, who is coerced into sacrificing her one hope of personal happiness for the sake of her lover’s reputation. Peter Konwitschny’s celebrated production returns to ENO, cutting to the heart of the opera’s themes of passionate love and tragic death with a modern and uncluttered staging, and a running time of less than two hours.