When thinking about video games, scholarship and academia do not normally come to mind.

But SUNY Oneonta Assistant Professor of Media Studies Karen Stewart has flipped that script by turning the creation of a video game into an immersive applied learning project involving more than 20 students over the course of five years.

Thanks to the students’ hard work, insight, enthusiasm and dedication, the video game, called “Leap of Faith,” is now available to play, as part of a month-long installation on the first floor of Milne Library. The game tells the story of a college student who magically travels back in time to the Revolutionary War.

Students involved in the “SUNY Oneonta Gamer Lab” project – all with different academic majors – contributed more than 600 development hours to the initiative and were involved in every aspect of game development, from conducting extensive historical research to outlining and writing game narratives to composing the game’s theme music. 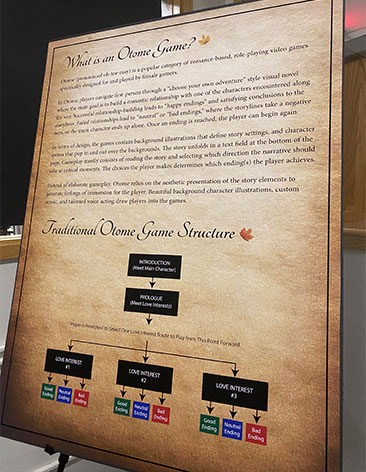 The project began five years ago when Stewart, whose research examines the narrative, aesthetic and game play of Otome visual novel video games, decided she wanted to build one of her own in an effort to better understand them.

“It became apparent really quickly that this could be an awesome applied learning project as well,” Stewart said. “From the instant we started, students showed up because they love video games and wanted to be involved. Everything you see in the game has been student-driven. … This has hands down been the most amazing, rewarding scholarly and experiential learning project I have ever led.”

During weekly production meetings, the students explored critical and ethical game design practice and learned first-hand how to build video games. They conducted visual, historical, archival and industry-related research and developed the game concept, researching character designs and background/settings and hiring freelance artists to draw them and create their vision.

The first student involved in the project was Sam Kaufer, who graduated in 2018 with a degree in Mass Communications and now lives in Manhattan and works in the digital media industry as a media coordinator. Kaufer said the project was “absolutely one of my Oneonta highlights.”

“In both an academic and creative sense, it was like nothing I'd ever done before; from the research phase and playing hundreds of indie games and visual novels, to the historical research and tracking down primary source documents from the time of the Revolution, every part of the process was new and exciting! As a history minor, it was a blast getting to learn so much about the local history of the small towns of upstate New York, which often go overlooked but have a storied past. As an avid video game player, visual novels were outside my realm of interest but I now have an appreciation for them and the stories they tell.” 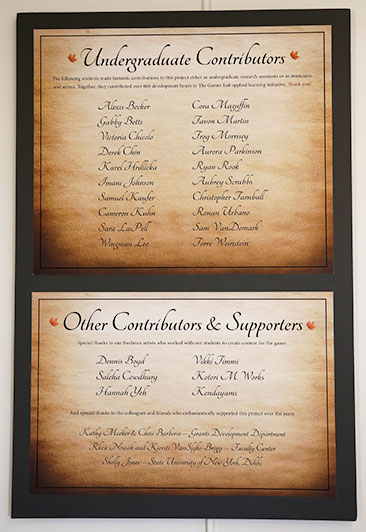 Sam VanDemark, Class of 2017, was the audio engineer/composer selected to write an intro and outro musical piece for the video game. Working with Stewart and the students to brainstorm instruments, song energy and structure was “ a pleasure,” said VanDemark, who now owns a home studio and works with local bands and artists in Saratoga Springs, NY.

“The takeaway from this project is simple,” VanDemark said. “Find something people are passionate about, keep an open mind, combine interests and ideas, then create. Most importantly, don’t stop until you’re all satisfied and pushing each other to the fullest potential.”

Head of Access Services and Library Technology Brendan Aucoin said he was excited when Stewart approached him to help with the research side of the project. Aucoin also developed a library guide curating learning materials and aspects of game studies at Oneonta.

“This struck me as a place where Milne Library could really be an equal partner in scholarship,” he said. “So often, we look at the library as just a collection of books or a place to study, but it’s a lot more than that. We librarians are faculty, we are researchers and we are engaged in scholarship along with the teaching faculty at the college. Being involved in such an amazing project like this is truly a unique experience.”

Moving forward, Stewart plans to apply the knowledge gained from this project “to conduct more nuanced textual analyses of Otome games,” continue finetuning the game, and get new students involved, since many of the original ones have graduated. She said she’s also looking forward to using the results of the applied learning portion to “discover even more fun, exciting, industry-relevant and socially meaningful ways to teach video game design to students.”

“What we ended up with is more beautiful than I what could have ever made on my own,” Stewart said, “and it’s a good reminder of why I’m invested in experiential learning and arts-based learning.” 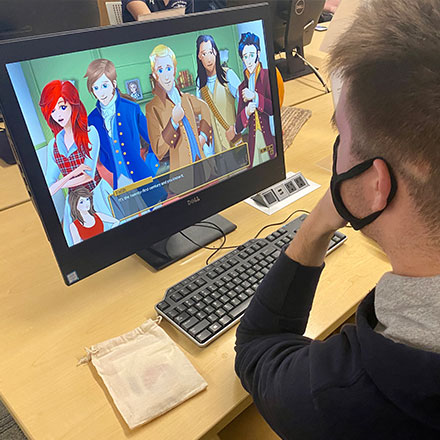 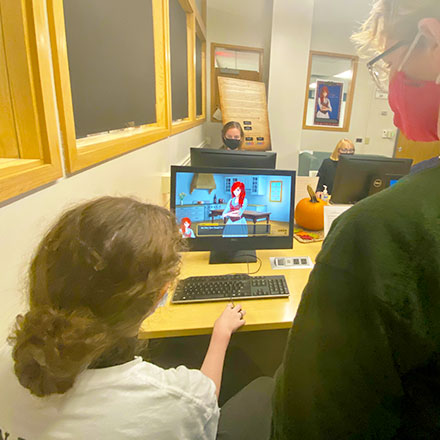