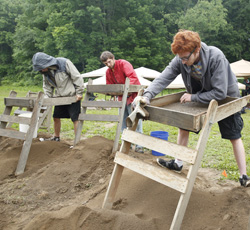 Eleven SUNY Oneonta students and two alumni spent a month of their summer sifting through excavated dirt in search of 4,000-year-old cooking hearths, stone tools and other evidence of ancient hunter-gatherer communities.

From May 27-June 26, the students worked eight to 10 hours a day, learning basic methods in field archaeology, including survey and excavation techniques, mapping, and flotation and laboratory analysis. The area of this year’s dig contains artifacts dating back 3,000 to 4,000 years and involves three different habitat zones: Charlotte Creek, forest and uplands, and the lake. 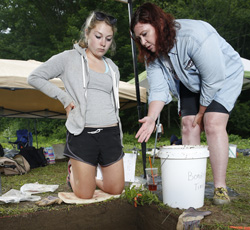 Walker and Klink believe the area was a gathering place for Native American people hundreds of years ago, before the transition from hunting and gathering to plant horticulture and agriculture. Each season, students find evidence to support this theory, including cooking hearths, fire pits, nutting stones and projectile points (arrows.)

“During the period we’re looking at, hunter-gatherers were moving up and down the river valley, living in certain areas for three or four months and then moving on,” said Walker. “Our hypothesis is that this is one of those rare sites where multiple hunting and gathering groups were coming together. The rule of thumb is about 20 to 25, no more than 50 people, because the landscape really can’t support more than that. But during the late summer and early fall, which is when we think people were coming here, there would have been a lot of resources available, particularly nuts, and we think they were cooperatively processing food.”

Some highlights this season included finding an adze (a stone tool used for wood-working, perhaps used to make canoes), multiple pitted stones (for processing nuts), choppers (for cutting meat or plants), a ground stone object that may be a ceremonial spear point or a pendant, and multiple projectile points. In addition, students logged the 10,000th field specimen at the site. This means that more than 10,000 specific, mapped locations for artifacts have been documented there.

Many of the students were anthropology majors, but the field school also drew students studying history, geoscience, biology, geography and chemistry. “Students learn all sorts of skills to apply to a variety of different fields,” said Walker. For many, including alumni Nicole Weigel and Kasey Heiser, who returned as field assistants, the hands-on experience sparks a passion for archaeology.

“The thing that really drew me into realizing this is what I wanted to do with my career was finding my first feature,” said Georgiana Patterson, a May 2015 anthropology graduate who hopes to find a job as a field technician or in cultural resource management out west.

“I found a hearth and just started scraping away,” she said. “I found a little blotch of dark dirt and then it started to expand, expand, expand, and there was a center of really, really dark and then it went out to kind of gray and dissipated a bit and then we found some post molds around it. It’s like hands-on history. You can kind of put yourself where they were, and that’s really awesome.”