There is currently an enormous amount of coverage in the mass media regarding caffeinated alcoholic beverages leaving people with a lot of questions. Here are links to some FAQs

The FDA's Q&As on Caffeine in Alcoholic Beverages

List of Manufacturers of Caffeinated Alcoholic Beverages (with product names)

Handouts-click the images below to get a larger page.

Put some think behind your drink

In light of all the recent media coverage regarding two commonly found caffeinated alcoholic beverages, we are providing a little information for you to consider prior to putting any of these substances in your body. There is a danger that comes when one mixes alcohol and caffeine, as the stimulant effect of the caffeine masks the depressant effect of the alcohol. In many cases, people who consume these beverages often have no memory of what they have done while drunk.

BAC (Blood Alcohol Content) is a measure of how much alcohol is in your blood. BAC had nothing to do with tolerance, which is the effect of your body adapting to alcohol exposure.

The table below offers an estimated BAC level if one were to consume one of the more popular caffeinated alcoholic drinks within one hour. While a number of conditions affect BAC, this table only considers two, sex & weight.

So just what are you putting in your body?

The two most popular caffeinated beverages list "malt liquor" as an ingredient. What is "malt liquor"? There aren't any really great resources but it seems as though "malt liquor" has several definitions.

Based on the cheap prices of these beverages it seems likely that the malt liquor used is one from cheaper sources.

Note: Many companies that offer cheap alcoholic beverages specifically target populations of lower-socio-economic status. They also utilize convenience stores as their primary distributors for this reason. Another example of business where a few people become rich by exploiting the underprivileged.

Caffeine is a plant product that acts as a stimulant on the central nervous system. According to the Mayo Clinic adults should limit their consumption to about 500mg per day. Comparing to coffee consumption is difficult because caffeine amounts vary widely by brand. A typical 8 oz home brew can range from 95-200mg of caffeine. A 16oz Dunkin Donuts brewed coffee can vary from 140-200mg. An 8.3oz of Red Bull contains 76mg caffeine.

Guarana is a red berry that grows in Venezuela and Brazil where it is used as a popular soft drink flavoring. Guarana contains high amounts of guaranine which is chemically similar to caffeine causing it to act on the body as a stimulant. Like many other plant supplements guarana has been marketed in a variety of ways none of which have been proven by research.

Taurine is a non-essential amino acid. Its function in the body is to regulate the level of water and mineral salts in the blood. Food sources include meat and fish. There are some studies that have suggested that taurine increases athletic performance and that combined with caffeine can improve mental performances. These findings are controversial. Excess taurine is excreted by the kidneys. There is little known about the effects of heavy or long term use.

There is an urban legend that taurine is extracted from bull testicles or comes from bull sperm. Taurine available to consumers in energy drinks is actually synthetically made.

Ginseng is a plant, the part most commonly consumed is the root. As a supplement, ginseng has been used for over five thousand years. It is most widely used as a mental stimulant. Research has shown that combining ginseng with caffeine and/or guarana can lead to added stimulations, (Professional Handbook of Complementary & Alternative Medicines 3rd Ed.).

The term "standard drink equivalent" is used to compare drinks. Not all alcoholic beverages contain the same percentage of alcohol so you have to do a little math to figure it all out.

If you multiply the volume of the beverage by the percentage of alcohol you can obtain the total amount of pure alcohol. You then divide by .6fl oz (A standard drink is 14 grams or .6fl oz).

One 12 ounce bottle of beer at 5% alcohol equals one drink. 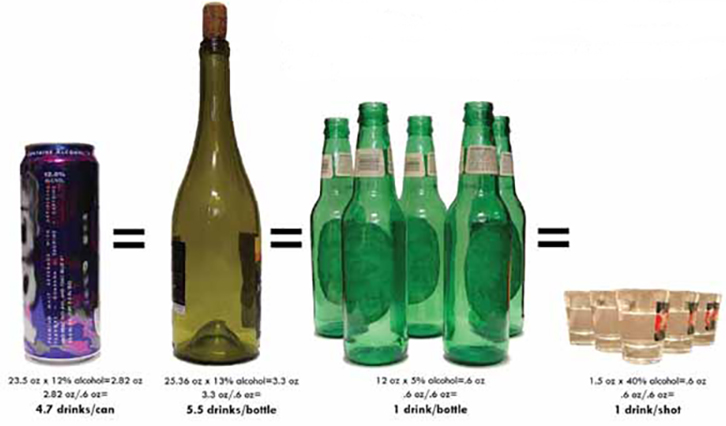