What does a positive climate future really look like? How can we, as a species, a nation, and a local community, effectively respond to the climate crisis? How would the systems we rely on every day, for transport, food, shelter, clothing, education, and entertainment, need to change? And how will the effort to restore ecological balance intersect with--and even amplify--other social movements? And even though climate change will inevitably bring struggle and disruption, can we envision a future where people are actually happier, feel more connected to one another, and find more meaning in their lives? 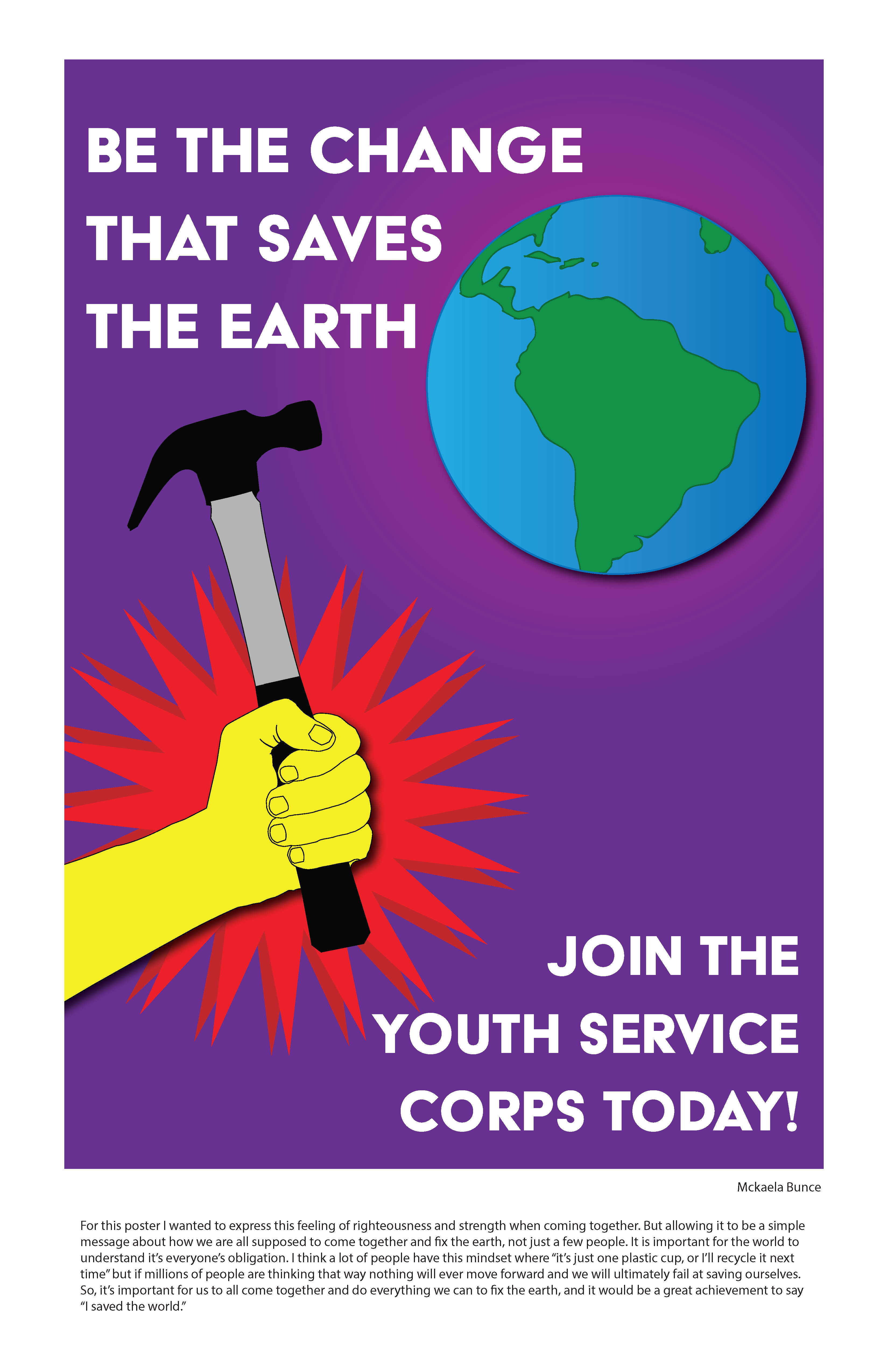 Could a National Service Year unite our polity and create meaningful experiences for young people like the military draft did in the past?

The goal of the 2041 Project is to promote creative and positive public thinking about the climate crisis. At heart it's a collaborative worldbuilding effort that encourages members of our campus and wider communities to imagine what our world might look like 20 years from now, if we started acting together to mitigate climate change.

The 2041 Project addresses climate change by applying the tools of world-building, typically used by science fiction and fantasy writers, game designers, and filmmakers, to collectively imagine a positive climate future. Through workshops, art projects, a podcast series, and eventually an immersive theatre event, the 2041 Project facilitators will engage a broad range of people in thinking the unthinkable thought about climate change--not that it will be the end of humanity, but rather that it won’t. It’s all too easy to imagine a grim outcome to our political, public health, and climate crises (attested to by our culture industry’s prodigious production of apocalyptica); the 2041 Project aims instead to do the hard work of cultivating positive visions of the future. Our mission is not to predict (or proscribe) a particular future, but to encourage people to imagine a possible positive future-and start acting now to make it a reality.

We can't build a positive future without many voices and points of view. We've created an innovative 1-hour workshop that invites participants into our worldbuilding project.

The workshops begin with an immersion into the future, outlining 10 of the major ideas that shape the world of 2041. Then, participants are invited to create a character by exploring the project timeline, imagining who they might be, and what role they might play, in the future. The heart of the workshop is the affinity group session, where participants can focus on a particular aspect of the climate future (food systems, housing, energy, culture, etc.). Through this activity, participants will be introduced to several tools commonly used by world-builders that have utility beyond this exercise. The session will conclude with an interactive read-out of the small group ideas, group reflection about the world-building process and what it would take to make our imagined future a reality. All of the ideas created in our workshops will be considered for inclusion in the evolving 2041 universe.

If you would like to bring a 2041 Workshop to your class, email Douglas.Reilly@oneonta.edu for more information.

The Immerstive Theater Project (event title to be determined) will transform Physical Science into a Living/Learning Community of SUNY Oneonta in 2041. Volunteer actors will portray its residents, and will guide the audience through a series of sets and scenes from the college of the future that might include a panel discussion by students debating the efficacy and ethics of geoengineering approaches to climate stabilisation, a ceremony where graduating seniors are getting their National Service Year placements, a music/dance performance in honor of Gaia Day, a workshop teaching people how to naturally dye their wardrobe to match the season's "in" colors, an indoor agricultural project, and more.

We are looking for creative partners! Have an idea for a scene at the ITP? Want to get your class involved in this exciting and rich worldbuildling project? Our cohort of creative collaborators will shape the scenes (and the overall 2041 scenario) that we'll be presenting at the ITP throughout the Fall and Spring. We're also looking for volunteer actors who want to portray future Red Dragons (of any age, etc). Email Doug Reilly at Douglas.reilly@oneonta.edu to get involved.

Independent Journalist Nadezh Moon explores the momentous changes happening in the year 2041, trying to illuminate the complex forces, actors, and events that have led to the present, fraught with danger but also hopeful for the first time in decades. Produced by SDC Graduate Intern Emma Sarnacki (who also plays Nadezh Moon) and with sound design by Andris Balin's Audio Arts IV and Studio Assistant I classes. The future is now!

Listen to the podcast!

On April 20, 2021, the 2041 team presented a panel discussion from the future. The panel discussed a fascinating issue affecting SUNY Oneonta twenty years from now: some students have rejected dorm life and instead are living in the woods at College Camp. You can watch the panel discussion here.

At the start of the Spring 2020 semester, over 100 SUNY Oneonta students in Dr. Brian Lowe's sociology classes and Ruben Salinas' computer art classes “traveled” into the future to collaboratively envision what the year 2041 might look like in a world that's taken major strides toward addressing climate change. During a full-day conference, students learned the basics of worldbuilding, heard from a climatologist about the realities of climate change today, examined the current visual culture of the campus, constructed a timeline of events that might occur between 2020 and 2041, and began brainstorming what the public art of the future, inspired by the WPA's posters of the New Deal. Future Art:

Explore a gallery of the students' work! 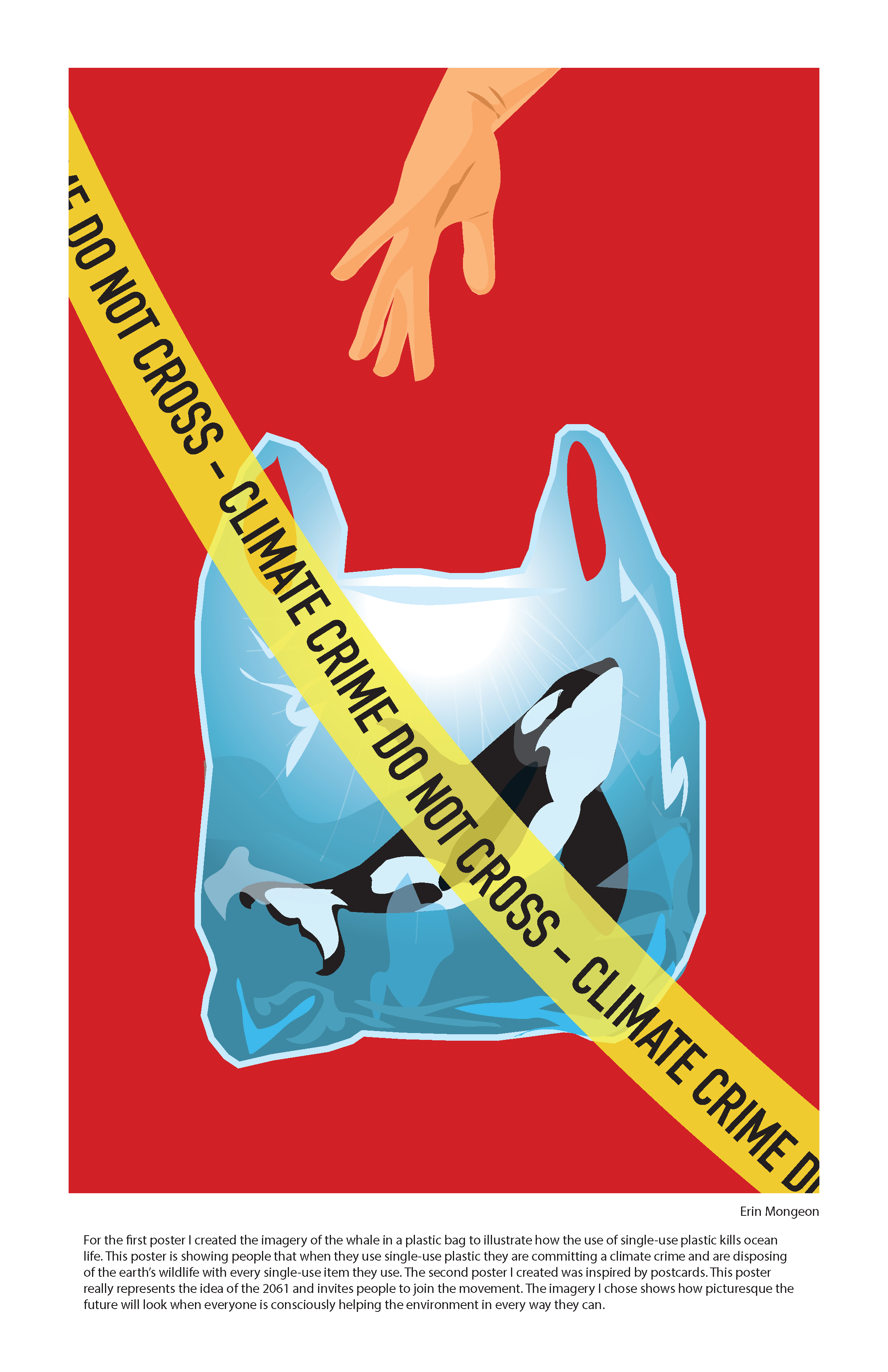 Will climate crimes be prosecuted more widely in the future?

Protein. Grow It. Don't Kill It. by Gabrielle Enrico 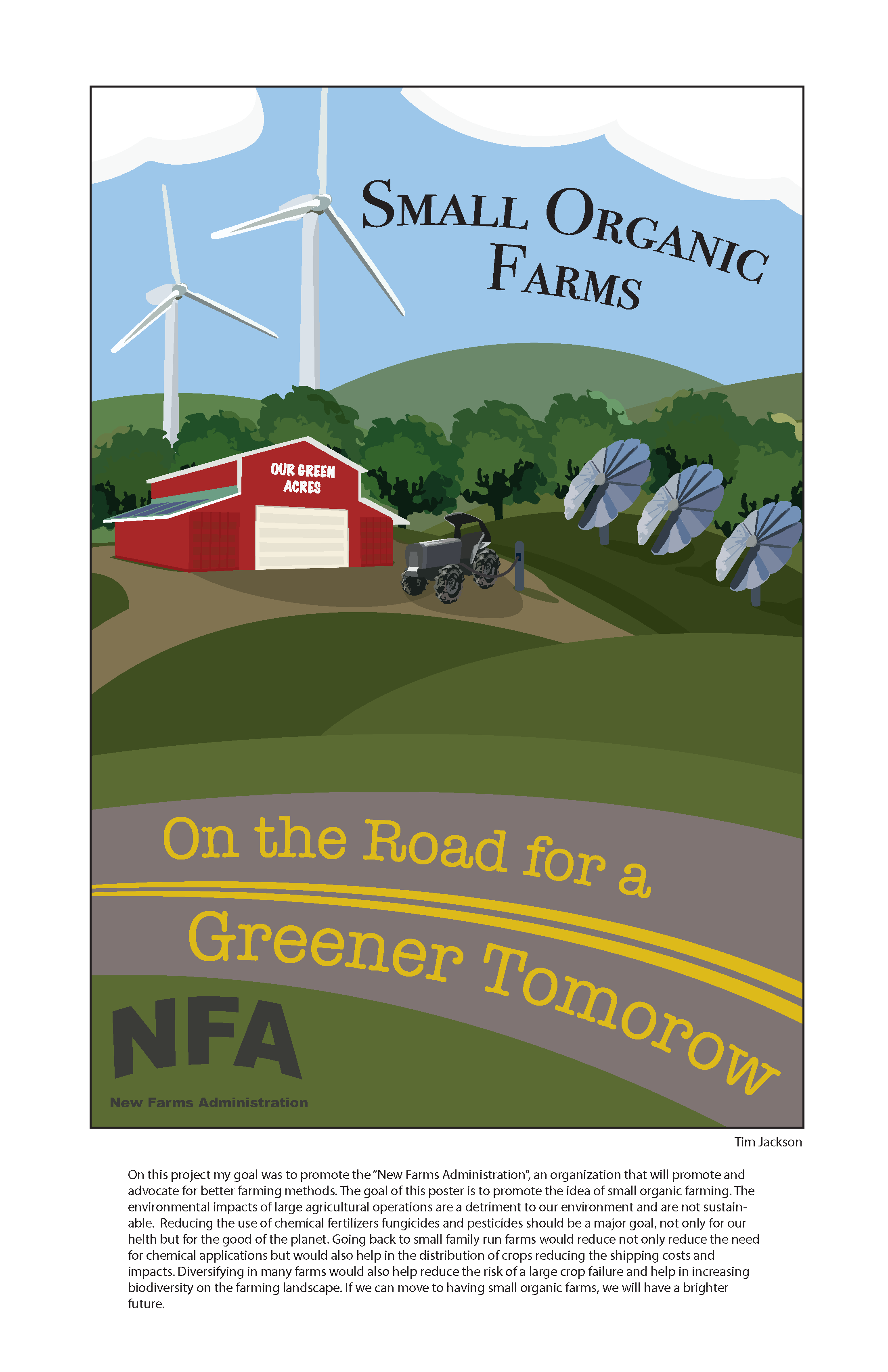 Can the revitalization of small farms create a more resilient and sustainable food system?

Every worldbuilding project has rules or foundational concepts (physics, if you will): 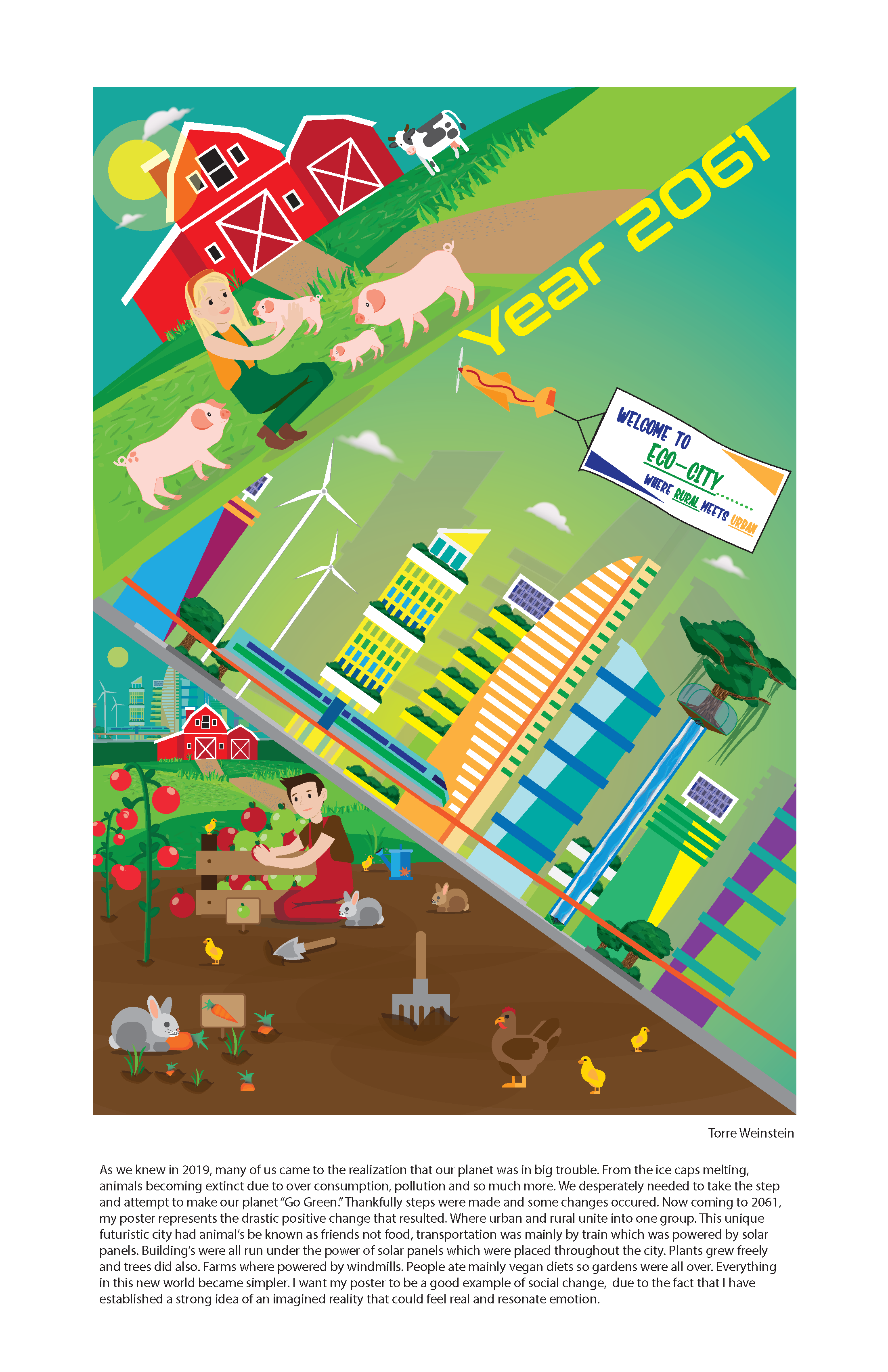 What will the cities of the future really look like?